Days of Tajik cinema in Uzbekistan were held from September 28 to October 3, 2021 as part of the XIII Tashkent International Film Festival – The Pearl of the Silk Road. 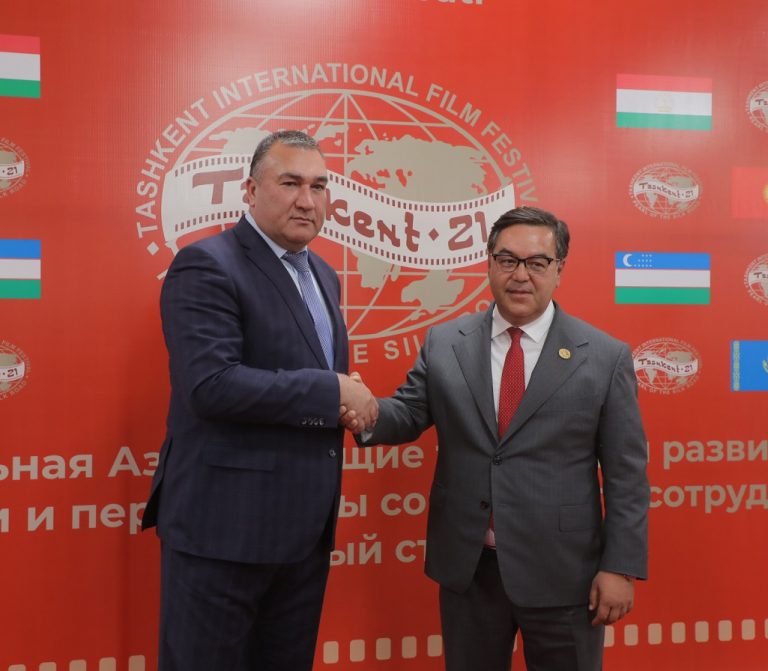 Representatives of the Tajik film industry had the opportunity to walk the red carpet of the XIII Tashkent International Film Festival – “Pearl of the Silk Road” and greet the audience.

The program of Tajik filmmakers included the following feature films “The Fate of a Poet” and “Rustam and Sukhrob” directed by Boris Kimyagarov, “Teacher” by Nosir Saidov, “Dance of Life” by Muhabbat Sattori, “Air Safar” by Daler Rakhmatov, “Bus” by Abdulkhay Zokirov, “Provincial Dreamers” by Rumi Shoazimov, documentaries “National Unity”, “Recognition of Sarazm” and the animated film “Highlander”.

Along with the screening of feature films in the center of Uzbekistan – the city of Tashkent, the creative team and representatives of the State Institution “Tojikfilm” visited the regions and cities of Fergana, Andijan, Margilan and Rishtan, met with Uzbek spectators.

On October 1, 2021, in the city of Andijan, Tajik guests were greeted by the deputy mayor of Andijan region, Shukhrat Abdumanonov, with bread and salt, dances and songs.

The grand opening of the Days of Tajik Cinema in Uzbekistan in the Andijan region officially began in a large cinema near the Uzbekgim shopping center.

Shukhrat Abdurakhmonov, Deputy Mayor of Andijan, and Mahmadsaid Shohiyon, Director of State Institution “Tojikfilm”, addressed the participants and introduced them to the current achievements of Tajik cinema.

The feature film “Teacher” was shown in Andijan. Before the start of the screening of the film, the Tajik delegation of filmmakers talked with guests and spectators.

After the screening, the guests were invited to the opening of secondary school № 30 named after one of the most famous Uzbek actors, People’s Artist of Uzbekistan Abbos Bakirov in the center of Andijan. It should be noted that this actor worked at the Tajikfilm film studio in 1956-1959, starred in the feature films Dohunda by Boris Kimyagarov and Nasriddin in Khujand by A. Bek-Nazarov and E. Karamyan.

The meetings of the cinematographers of Tajikistan were also held in the Fergana region in the Nurkhan large hall. Before the cultural event, Deputy Mayor of Fergana Region Khurshedjon Akhmedov and Director of Tojikfilm Mahmadsaid Shokhyon addressed the audience. People’s Artist of Tajikistan Nasriddin Nuriddinov, cameraman Zaur Dakhte and director Muhabbat Sattori praised Tajik cinema and cooperation between Tajik and Uzbek filmmakers. The audience was shown a feature film “Dance of Life” directed by Muhabbat Sattori.

An exhibition of photographs by Zaur Dakhte “Tajikistan through the eyes of Zaur Dakhte” was held in the Big Hall of the Uzbekfilm film concern. Zaur Dakhte also held a master class with young Uzbek artists, which was attended by students of the Uzbek State Institute of Fine Arts and Design named after Kamoliddin Behzod and received answers to their questions.

The reason for pride was the fact that together with Nikita Mikhalkov, Raj Kapoor, Nuri Bilge Ceylan, Oyturgan Temurova also took part in the Tashkent International Film Festival “Pearl of the Silk Road”.

The reason for pride was that at the Tashkent International Film Festival “Pearls of the Silk Road”, together with Nikita Mikhalkov, Raj Kapoor, Nuri Bilge Ceylan, Oyturgan Temurova,

Within the framework of this event, representatives of the Tajik delegation were received by the Director General of the XIII Tashkent International Film Festival “Pearl of the Silk Road”, Director General of the Agency of Cinematography of the Republic of Uzbekistan Firdavs Fridunovich Abdukhalikov. He spoke about the hospitality of the Tajik people and called on filmmakers to cooperate, since the Uzbekfilm film concern was repaired and equipped with the best equipment of the German company ARRA. The Government of the Republic of Uzbekistan has allocated 28 million dollars for the provision of modern equipment.

Also, a memorandum was signed between the State Institution “Tojikfilm” and the Agency of Cinematography of the Republic of Uzbekistan on the start of filming a feature film about the life and work of Abdurahmoni Jami and Alisher Navoi

The Tajik delegation returned to the city of Dushanbe on October 4, 2021.