PRESS CONFERENCE ON THE RESULTS OF THE ACTIVITIES OF THE STATE INSTITUTION “TAJIKFILM” IN 2021. 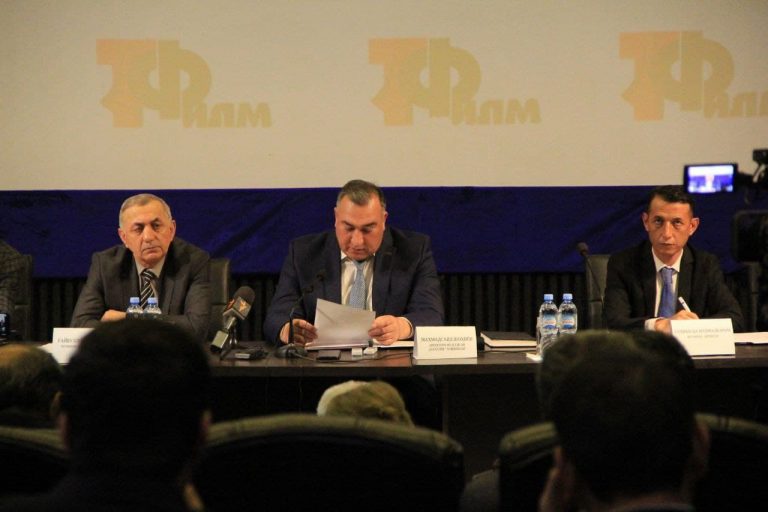 Today (09.02.2022) at the cinema named after Tohir Sobirov, a press conference was held on the results of the work of the State Institution “Tajikfilm” for this year with the participation of the management of the institution and media representatives.

During the meeting, the director of the State Institution “Tajikfilm” Mahmadsaid Shohiyon analyzed the activities of the institution in 2021 and the state of the national cinema.

The feature film “Bakhori hazonrez” based on the novel by the people’s writer of Tajikistan Karomatullo Mirzoev “Mokaroi zindagi” directed by Rajabali Pirov. The premiere took place on February 4, 2022 at the Vatan cinema.

The feature film “Dov” directed by Mukhiddin Muzaffar has been completed.

In cooperation with the young director Zarina Kalandar, the development and filming of the feature film Tavalludi Digar in the Gorno-Badakhshan Autonomous Region has been completed, and the film is being edited.

Preparations are also underway for the development of the feature film “Jami and Navoi”, presented by the top leadership of the two friendly and fraternal countries, in cooperation with the Cinematography Agency of the Republic of Uzbekistan.

The short film “Shammae az rusumi Navruz” was prepared by the leadership of the institution in GBAO and shown on regional television.

A short feature film “Bozi” directed by Mumin Kadyrov has been prepared.

The short feature film “Nasib” directed by Sharofat Arabova was fully prepared and presented to cinematographers.

The work on the short feature film “Dodaraki farishtaho” based on the work of Sayf Rakhimzoda Afardi directed by Umedsho Mirzoshirinov has been completed. The premiere of the film took place on January 28, 2022 at the cinema named after Tohir Sobirov for lovers of domestic cinema.

The production and preparation of the animated film “Sarguzashti Gandum” based on the work of Abdurofe Rabizoda has been completed.

In turn, correspondents and journalists of periodicals and television and radio channels took an active part in the meeting.

Media representatives discussed issues related to the prevention of smuggling of audiovisual materials, the development and shooting of historical feature films, the training of highly qualified personnel, the attraction of grants and investments in the field, the creation of joint films, the establishment of mutually beneficial cooperation with foreign filmmakers and other questions to which they received specific exhaustive answers.

The meeting ended in an atmosphere of mutual understanding.